Any server that responds to the messages described in OPeNDAP Messages using the OPeNDAP Data Model is an OPeNDAP server. The messages and the data model are published standards, available to anyone to use.

The OPeNDAP group, in addition to publishing and maintaining the standards described here, maintains a server that complies with the standard. This is Hyrax.

The OPeNDAP group produces and supports Hyrax, a modular data server that can be used in a variety of ways to serve a wide variety of data with OPeNDAP.

Hyrax is flexible enough that it can serve data that currently exist in a wide variety of data storage formats, ranging from HDF4 data files to netCDF data to data in some arbitrary non-standard format using the FreeForm module.

Hyrax is modular, too, which means it can be outfitted to serve the particular needs of your data without weighing down its performance with features you don't need.

The Hyrax server is actually a combination of two distinct servers, running on the same machine, or on two machines connected with a very fast link. One server serves as the user-facing "front end" to the system, while the other provides the "engine room", optimized to turn requests around quickly.

The front end server is called the OPeNDAP Lightweight Front end Server (OLFS). It receives requests for data and services in multiple formats and forms, and is meant to be as "user friendly" as a server can be. It also handles such chores as authentication and authorization-checking, and responding to catalog and bot requests. It can also construct complex data requests from multiple requests from its parner server. 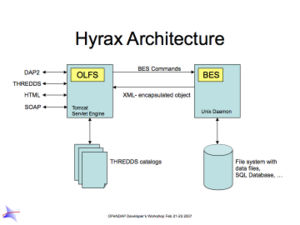 This other server, called the Back End Server (BES), does only one thing—provide data—and is designed to do it fast. It handles the compute-intensive parts of processing an OPeNDAP client request for data. This results in higher performance for small requests while not penalizing the larger requests.

Separating the two roles allows several paths to optimizing a server, while still resulting in higher performance for small requests. An OLFS controlling multiple BES processes on a machine can process multiple requests quicker because while one BES is occupied with retrieving its data, another can be processing its data. An OLFS controlling BES processes on multiple machines can implement a rudimentary load-balancing scheme to protect servers from overload. What's more, compute-intensive clients can optimize their processes further by sending requests directly to the BES.

The two parts of Hyrax are both installed by the same script, but they are two different animals, which may require different kinds of attention from an administrator. Testing OLFS requires a working BES, so it's typical to start the installation with the BES.

The BES is a standalone server. Its installation involves parking its code somewhere to be run as a daemon and configuring your system to execute it.

After that, though, there are several configuration options you'll need to address by installing software on your machine, and by editing the Hyrax configuration file, called bes.xml. Details of these options are found in the Hyrax documentation, but these are the decisions you'll have to make:

What kind of data
Hyrax is equipped to serve data stored in any of several different file formats, HDF, netCDF and others. Each different format requires its own handler, and your machine must have shared libraries containing these handlers installed. For example, in order to serve netCDF data, the netCDF handler library must be available to Hyrax, and identified in its configuration file.

Where the data lives
A server equipped to serve data must be able to find that data. Lines in the bes.xml file identify the disk location of your data files. Hyrax can provide a limited amount of browsing capacity to users, through its WWW interface. Access is specificed by identifying directories where data resides.

What kinds of services
Along with simply supplying data, Hyrax can supply several different services, including serving the data as ASCII values, and the form-driven web interface. The bes.xml file is used to specify the list of services. The drivers for these services are installed as part of the default installation of Hyrax, but they need to be chosen and identified in bes.xml.

Once these three tasks are accomplished, and once data is moved into the appropriate directories, your server should be ready to provide data to all comers, but most specifically to its OLFS.

The OLFS is a Java servlet, so its installation involves installing the Tomcat servlet infrastructure, and then configuring that with the OLFS. There are four configuration files, but unless yours is an unusual case, you'll likely only have to look at two of them. See Hyrax_-_OLFS_Configuration for more information.

Use the olfs.xml file to specify these important features of the OLFS operation:

Address of BES
The OLFS is the front door to data from the BES. Use the olfs.xml file to identify where to find this server.

Dispatch handlers
The OLFS "offers" the incoming URL to a series of "dispatch handlers" until one accepts it and executes. This allows the OLFS to offer directory and catalog services, as well as data services and more. Use the olfs.xml file to nominate the dispatch handlers (they come with the OLFS, and do not need to be separately installed).

Catalog requests
The OLFS can handle THREDDS catalog requests, as well as directory requests, an older part of the DAP standard that also involves data about a collection of data files. The THREDDS information can be static (provided from a file) or dynamic (generated by a review of the available data).

File access
You may have individual files you want served intact via this server. These might include documentation of the data files, or of the server.

There are some other features, too, like a bot blocker and a version message, as well as the experimental SOAP message handler. These are also configured with olfs.xml, and you'll find more information about them at the link.

THREDDS is a catalog standard for scientific data promoted by scientists at UCAR. It allows

The default file will allow dynamic catalogs to be created and should allow your server to respond to THREDDS requests properly. It's possible you may want to serve a static THREDDS catalog, too. This can be done by editing the catalog.xml file, and you'll find links to instructions for that at Hyrax - THREDDS Configuration.

You can configure a single OLFS to work with multiple BES instances. This offers an opportunity to do rudimentary load balancing, or to isolate data on one server or another. See the Hyrax configuration chapter for more information on the subject.